Have a browse through our VoIP & VoIP Software Solutions

New to VoIP software? You’ve come to the right place. VoIP has been the buzz word in the industry over the last few years and for good reason, as more and more companies implement VoIP solutions. Hearing about it is a great start, but if you’re new to VoIP software then allow us to thoroughly explain exactly what VoIP is and the technologies around it.

VoIP stands for Voice Over Internet Protocol, or in more simple terms a telephone service that is generated over your Internet connection.

There are many different types of VoIP services, including WhatsApp, Facetime and Skype voice calling which you may have used before. These are typical examples of consumer VoIP services.

The below diagram outlines the basic elements that are needed in order to create a Business/Enterprise VoIP software solution. The sections below will cover all of the major elements to create your very own VoIP solution. 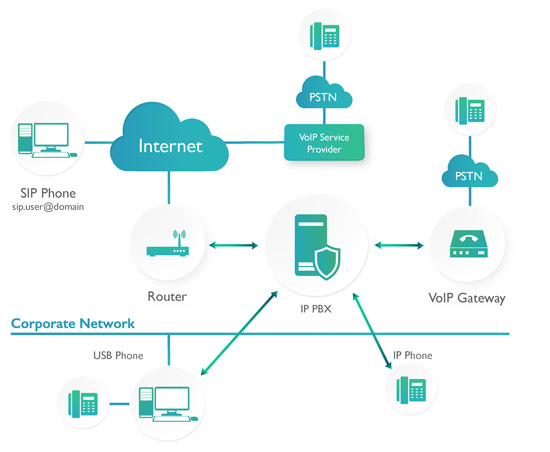 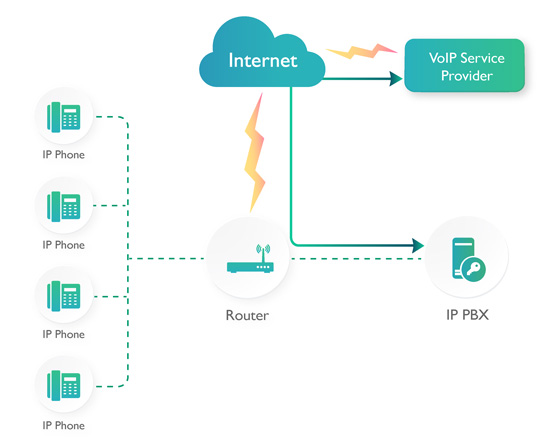 In order to set up a basic VoIP service you will need the following:

In simple terms, this outlines the methodology which devices use to create and maintain a VoIP call over the Internet. SIP is a very important protocol in Internet Telephony and it allows you to harness benefits of VoIP, such as reduced call costs.

What is a SIP Phone?

A SIP Phone is any phone that makes use of the SIP Protocol to set up and manage calls. In order to make a VoIP call over the Internet you will need a SIP phone to generate the call. A SIP phone is often referred to as an IP Phone, specifically when referring to hardware SIP phones and desktop SIP phones.

There are different types of SIP Phones and they are classified in two main categories:

Generally, a hardphone will connect to the network using an Ethernet cable, the same way you would connect your PC or laptop via cable to the network. Some hardphones have been built with Wi-Fi connectivity inside so that you can connect it directly to the wireless network.
Another major different between hardphones and analogue phone is the power requirement. Hardphones require significantly more power to operate, which can be provided with a power supply (similar to that used to charge your mobile phone) or directly via the wired network using power over Ethernet (PoE).

Some new hardphones include a technology called DECT which allows them to connect to the network wirelessly. DECT is a wireless standard that has been used in analogue telephones for many years and provides a very stable connection and excellent voice quality. It also allows the hardphone to be mobile within the range of the DECT base station.

SIP or IP Phones can include a number of intelligent features such as phonebooks/directories, custom ringtone, custom screensavers, multiple line and colour displays, and many others.

Yealink is the global leading hardware SIP Phone manufacturer and offers a variety of hardphones for any network requirement.

Software SIP phone or Softphones
A Softphone is a software program that provides the same telephony functionality as a hardphone. A softphone can be run on any number of devices, such as:

The device would need a microphone and speakers in order to facilitate the call, or you would need to connect a headset to the device (this is particularly relevant for desktop computers).

Applications like WhatsApp, Facetime and Skype work like a softphone, but do not allow you to connect to your own VoIP/SIP service provider.

A VoIP or SIP Service provider performs a similar function to the Telco in standard analogue calling. They would provide you with a telephone number or a SIP Trunk and they will give you all the network information that you need to configure your SIP Phone (hardphone or softphone).
The Service Provider is responsible for the interconnects between you and the party that you are trying to dial. Outgoing phone calls are generally charged for per minute of use, the service provider will record the time of the call and do the billing accordingly.

A business can have multiple SIP Trunks or telephone numbers. A SIP trunk can also support multiple simultaneous outgoing calls. All of these will have a bearing on the cost that a service provider will charge for a SIP trunk.

What is a PBX?

PBX is an acronym for Private Branch Exchange refers to a private telephone network that is used within a company or organisation.
There are two keys reasons or functions that a PBX provides to a business. A PBX allows the business to have more physical telephones than the number or telephone lines (or numbers). Traditional analogue telephone systems require a physical telephone line per phone number. In an organisation with hundreds of employees this is critical. The other function is that a PBX allows users/employees to make calls between each other at no cost. These calls stay internal and thus there is no outgoing call costs.

A PBX will also provide a number of additional features, such as:

What is an IP PBX?

An IP PBX or VoIP phone system replaces a traditional PBX by providing the same functionality on a server which is connected to your company network. In this case, all calls are made using the data network and are no longer channelled through the traditional telephone system.

An IP PBX will use VoIP software and VoIP technology to route incoming and outgoing calls via your internet connection. Hosting of an IP PBX can either be on-premise (in the organisation’s server room) or cloud hosted (in a remote datacentre) depending on the requirement.

A benefit of an IP PBX is that it gives employees the ability to have a single extension number that can be used on their desktop IP in the office or a softphone application on their smartphone or PC, providing unparalleled mobility. Voice and video conferencing solutions are also often included in an IP PBX.

An IP PBX can include many complex functions that are difficult and more costly to implement with a traditional PBX, such as:

With the use of a VoIP gateway, you can connect existing phone lines to the IP PBX and make and receive phone calls via a regular analogue telephone line.

Considerations
Since VoIP services are running over a broadband Internet connection, there are some considerations to that need to be taken into account to ensure the best call quality.
With general Internet browsing it doesn’t matter too much if there is a slight delay or jitter when receiving data and it will hardly be noticed. Voice calls are real time and thus very sensitive delays, loss and jitter.

Jitter
Jitter is a result of voice packets taking different paths and thus arrive at different times. This can result in audio sounding scrambled and can be quite a common problem in VoIP.
The introduction of jitter buffers can reduce this as can separating the VoIP and data traffic on the network.

Packet Loss
When data get lost while travelling across the network, this can result in broken conversation. This is often caused by network congestion or network malfunctions. Wireless networks are more prone to packet loss and not always ideal for VoIP calls.
Packet loss is measured as a percentage, i.e. the percentage of packets lost compared to the total number sent.
A higher packet loss results in poor call quality. Packet loss should be less than 1% to maintain high quality calls.

Latency/Delay
Latency or delay can be as a result of many physical (distance) and networking (Codec selection) factors. Delay in the conversation can be heard on both sides of the phone call. Once the delay is over 250ms it can be perceived by the human ear.

Codecs and codec selection
Codecs refer to the method of Encoding and Decoding of voice packets in VoIP applications. The Codec selection has direct impact on how natural a call will sound. However, it can also have an impact on the delay perceived within a call and is thus important to choose the best Codec for the application.
Each Codec has it unique advantage in terms of call quality versus bandwidth usage.
These are the most common Codecs in use:

Got Questions?
Reach out to us, or alternatively,  contact Official Platinum Distributors, Nology for any questions or concerns you may have. We look forward to hearing from you.